This year (and absolutely last month!) seems to be very hard for me. Am I really so much unlucky? Or did it accumulate to balance any earlier happiness? Because today (Sunday!) I experienced a total power failure in my home office. My wife tried to print child’s homework, while we lost power in wall sockets of the room with the printer. However lights remained OK, also other places in my apartment were not affected. The bad news was, that it all happened in my living room, so I couldn’t leave it as is for next decade…

Let’s go back from my whining and focus on facts. From my best knowledge laser printer can cause a big spike of electricity consumed at home, while warming up. Also that printer is quite old, but was not moved around for longer period. Its environment stayed mostly intact. Additionally I placed a brand new PC in that room, meantime changed a cable extension cord and I’ve continue to got few Raspberry Pi running all the time (connected to UPS though). Still nothing did caused any problem so far. Yet, most surprising news - the power breaker stayed in [ON] state.

Then spending an hour on an investigation, while I unplugged then plugged again the devices gave no extra clue. Once I turned off the breaker and turned it on again, I could have the power inside sockets for 5-10 secs, no matter, what was connected to the wall. It was really hard to find anything reliable and repeatable behavior. What I did noticed, however, at the time I was playing with the breaker I saw a spark (extra light) next to the breaker inside the electric panel. I opened it, took my electric meters and started real internals investigation.

And at the end of the day it made me doubting … in all the skills the electrician, who 5 years ago was renewing my indoor installation. The bus bar, that connected all breakers with main power source was mounted improperly. Thankfully it didn’t put the apartment on fire, as last two items of it shown below (since it’s back side, last two are on the left side) were not screwed at all: 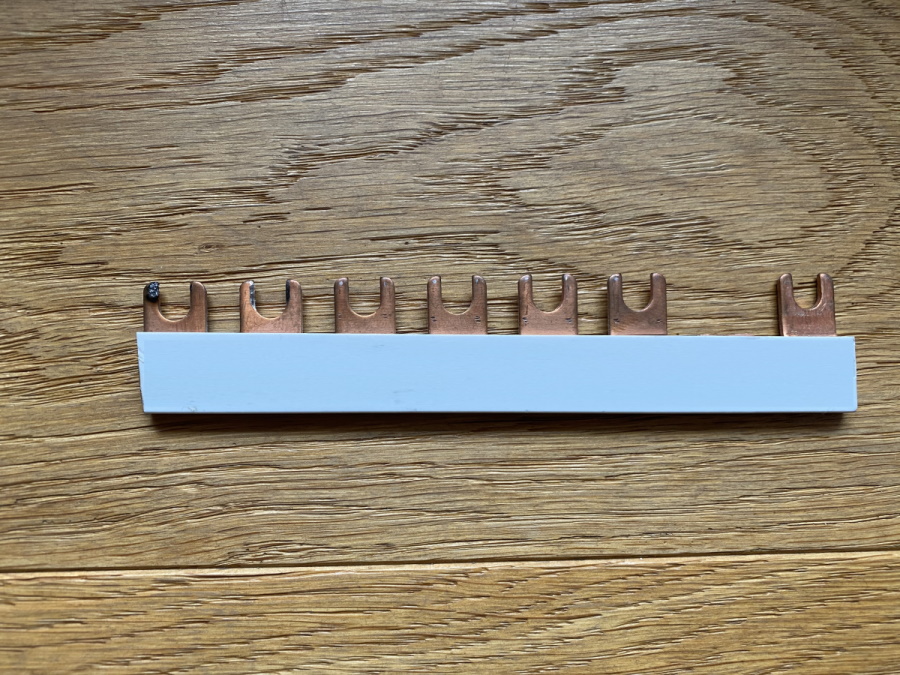 You can clearly see two of them got fried a bit, as due to lack of screw pressure over the years they detached more and more from the breaker and caused sparks to jump over it. Unimaginable!

Again, I believe this doesn’t happen to anybody.